Are We There Yet?

The Rise and Evidence of Fictional Dystopia Today

The word dystopia is defined as “an imagined place or state in which everything is unpleasant or bad, typically a totalitarian or environmentally degraded one” (Oxford Dictionary, 2017). Dystopias can be demonstrated in politics, social spheres, or the environment we live in. In fiction, dystopia is used as a motive for cautionary tales, which aims to “provide fresh perspectives on problematic social and political practices that might otherwise be taken for granted or considered natural and inevitable” (Booker, 1994). Today, our generation is flooded with various interpretations and examples of reaching peak dystopia. From the rise of Donald Trump, global warming, or even increased popularity of artificial intelligence, we have all faced the realization that we are seeing signs of dystopia. 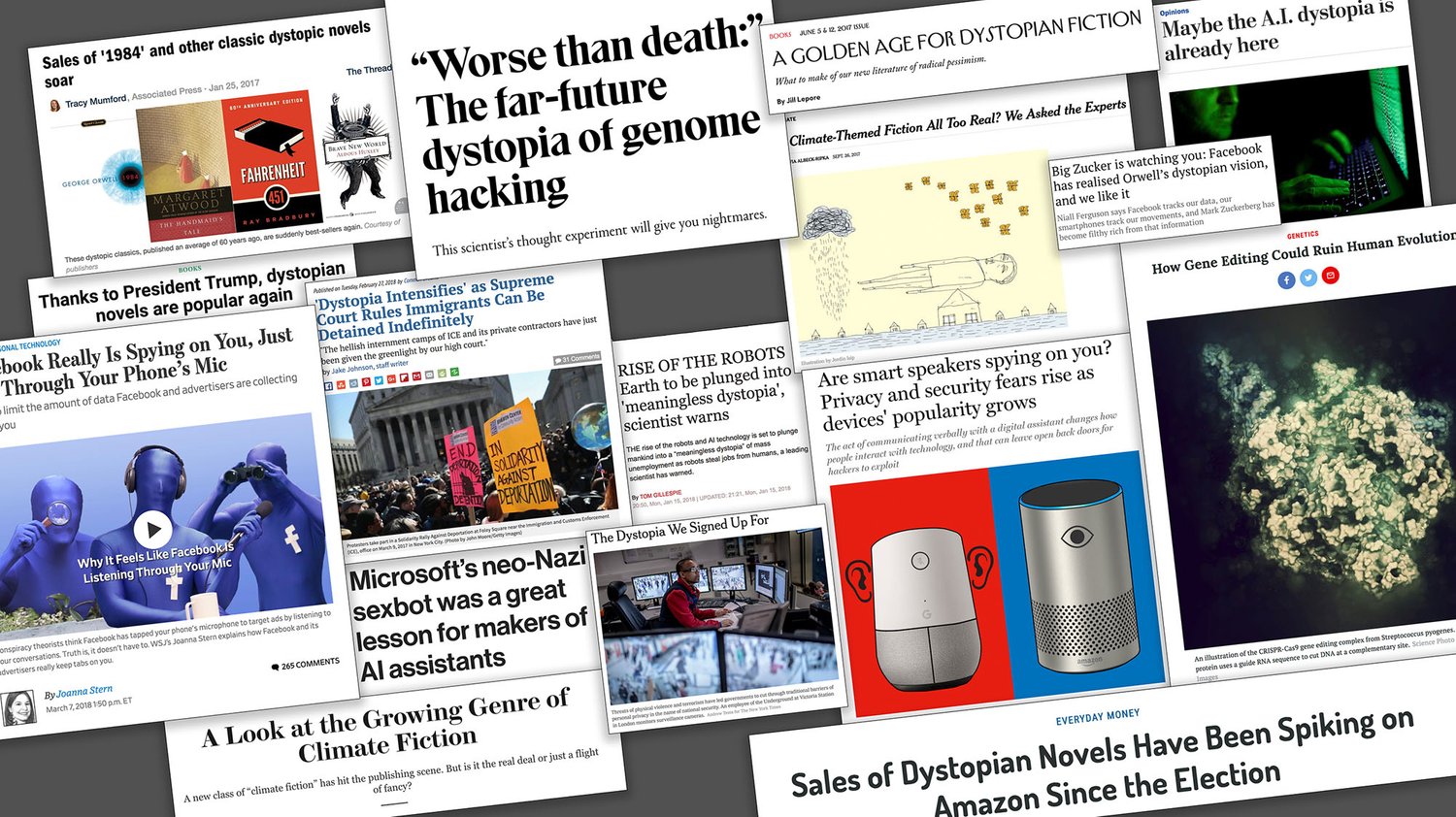 “Are We There Yet?” is a book that compares fictional dystopias that were written and predicted in earlier years to dystopian realities that are happening today. The title, “Are We There Yet?”, questions if our current world has reached the dystopia that was once warned about. “Are We There Yet?” refers to popular dystopian fictions, such as Nineteen Eighty-Four, Fahrenheit 451, It Can’t Happen Here, and more. Themes and quotes in these novels are compared to real life dystopias, such as the rise of CCTV, escapism through reality television, and America’s falling political climate.

“Are We There Yet?” is mostly visual and does not offer context, unless the reader refers to the book’s glossary at the end. This allows readers to ponder and question themselves about popular dystopian contrasts presented in the book. It is up to the reader to educate themselves and find out more about the events that we have ignored for many years. 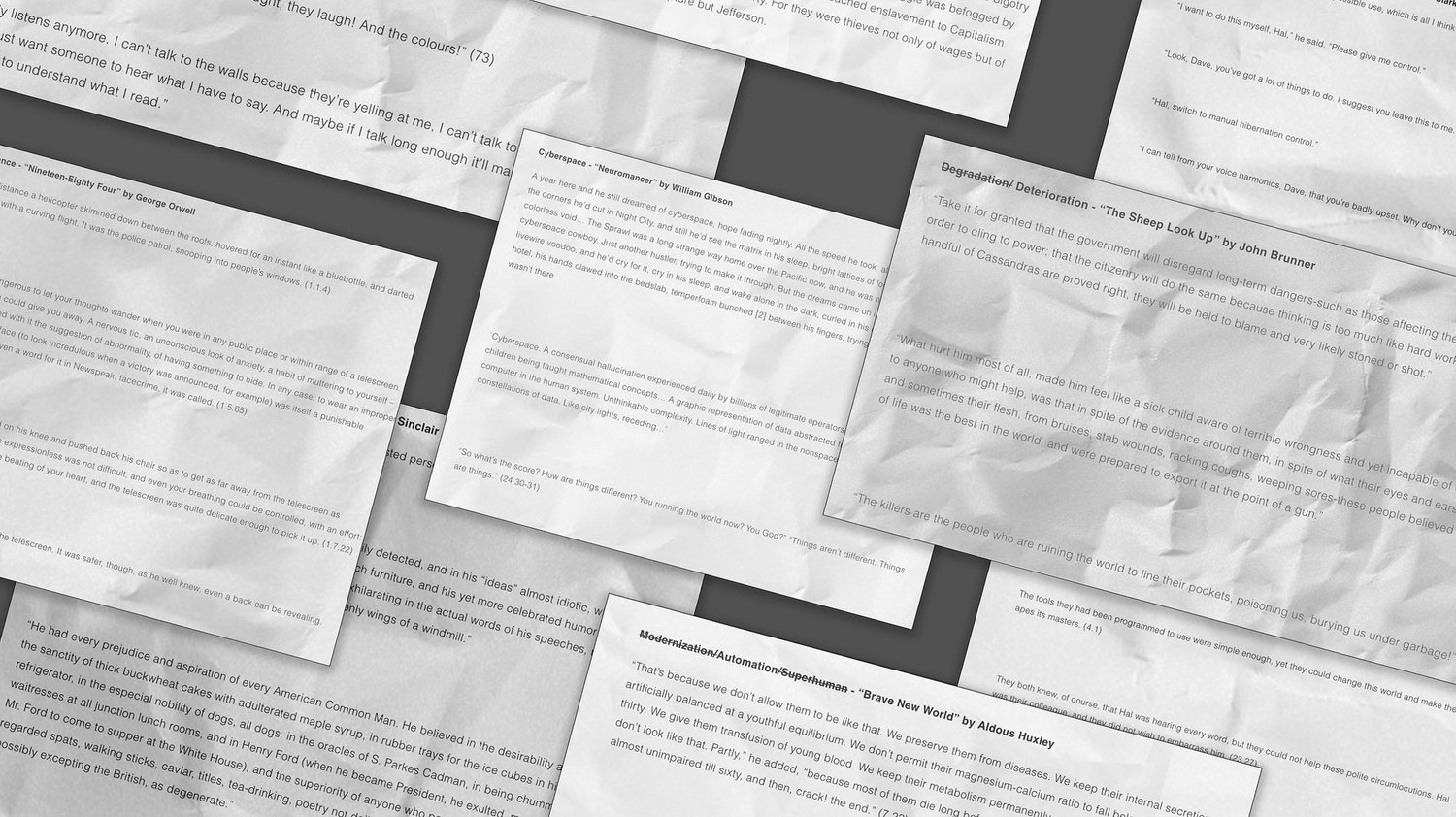 After collecting various quotes from fictional novels and real-life news, I manipulated images and created visuals based off of the dystopian events. The spreads depict an unrestful, fearful, and imperfect representation of how far we have let our world come. Playing along this mood, the reading experience as a whole is distorted and unclear, which forces readers to connect cues and find out major dystopian themes.

Through many spread iterations and figuring out how to depict comparisons of the fiction and non-fiction, the book was refined and created. Using plexiglass covers, the project’s look contrasts between what dystopian fiction believes is a polished and controlled world, verses coptic stitch binding, which is a loose, unrefined spine, that is barely holding on.

Click here for a full documentation of process work. 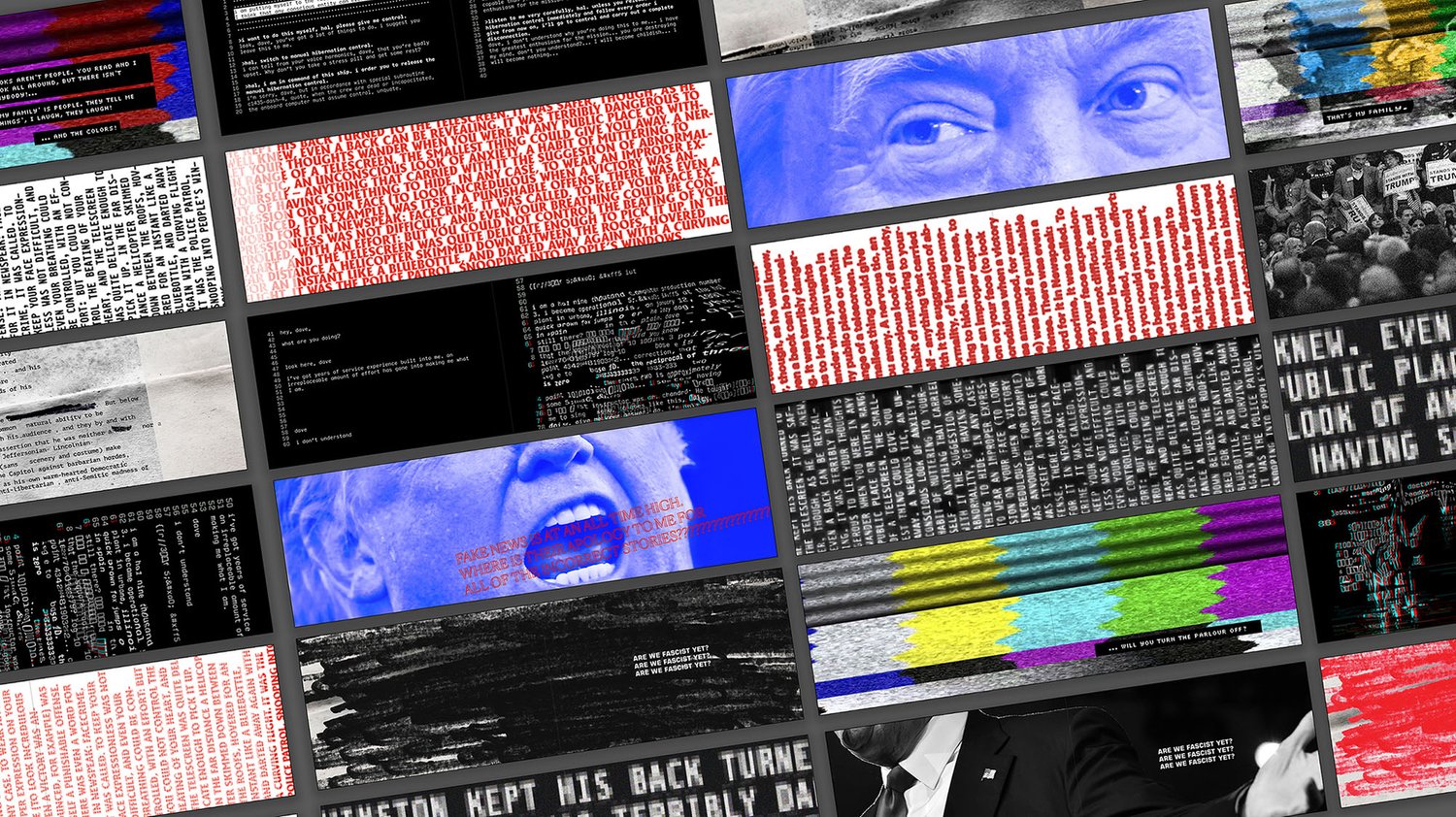 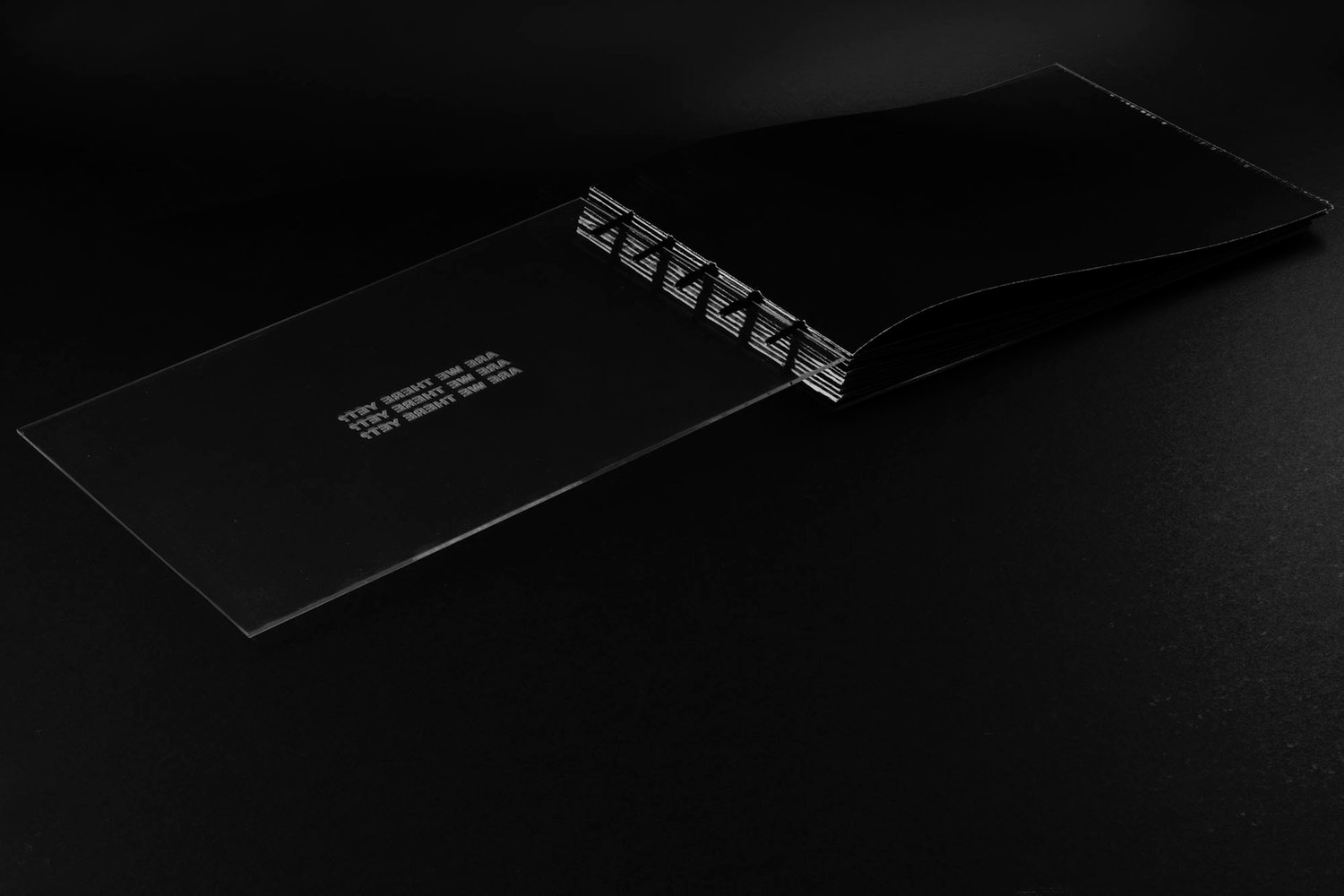 There will be, in the next generation or so, a pharmacological method of making people love their servitude, and producing dictatorship without tears, so to speak, producing a kind of painless concentration camp for entire societies, so that people will in fact have their liberties taken away from them, but will rather enjoy it, because they will be distracted from any desire to rebel by propaganda or brainwashing, or brainwashing enhanced by pharmacological methods. And this seems to be the final revolution. 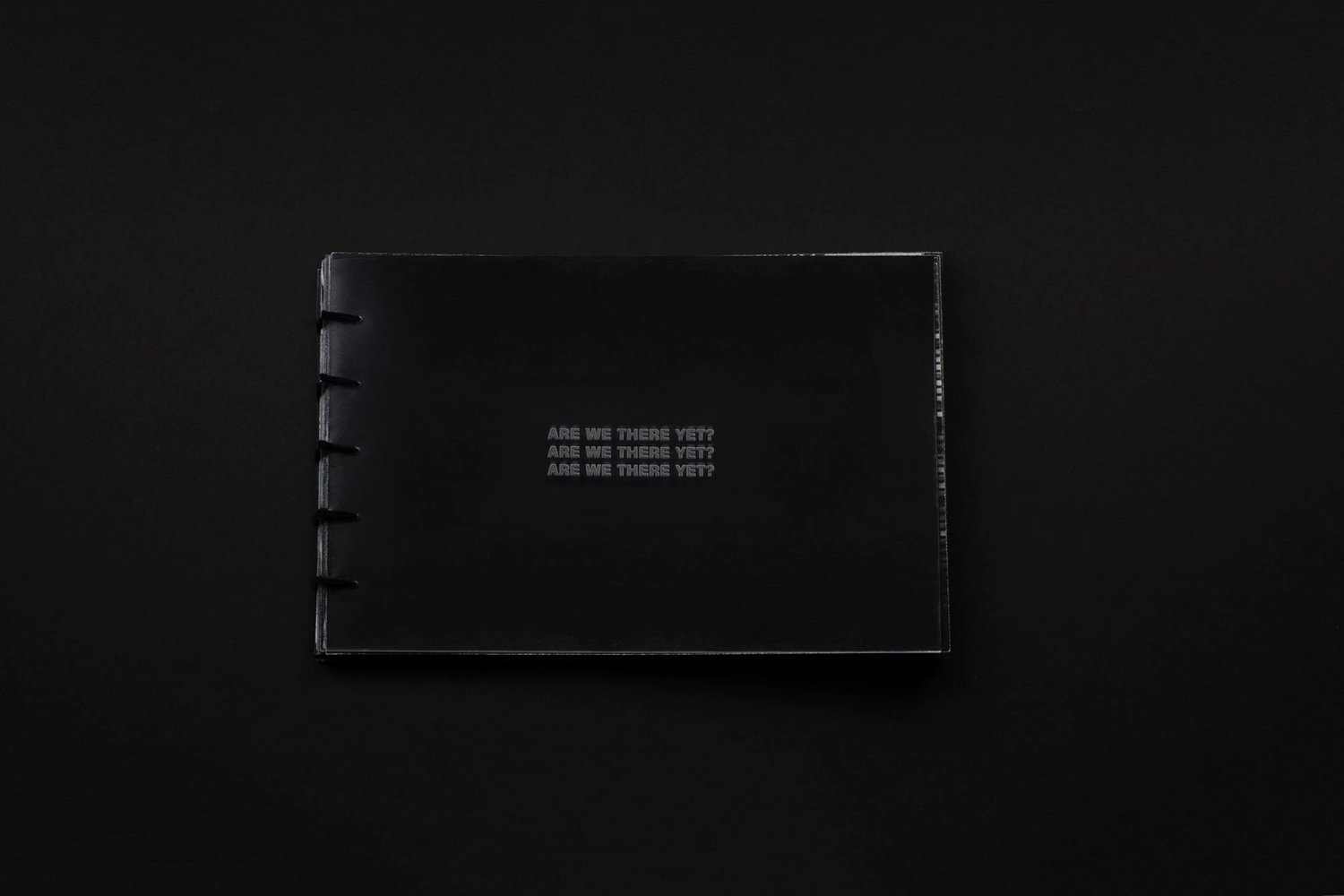 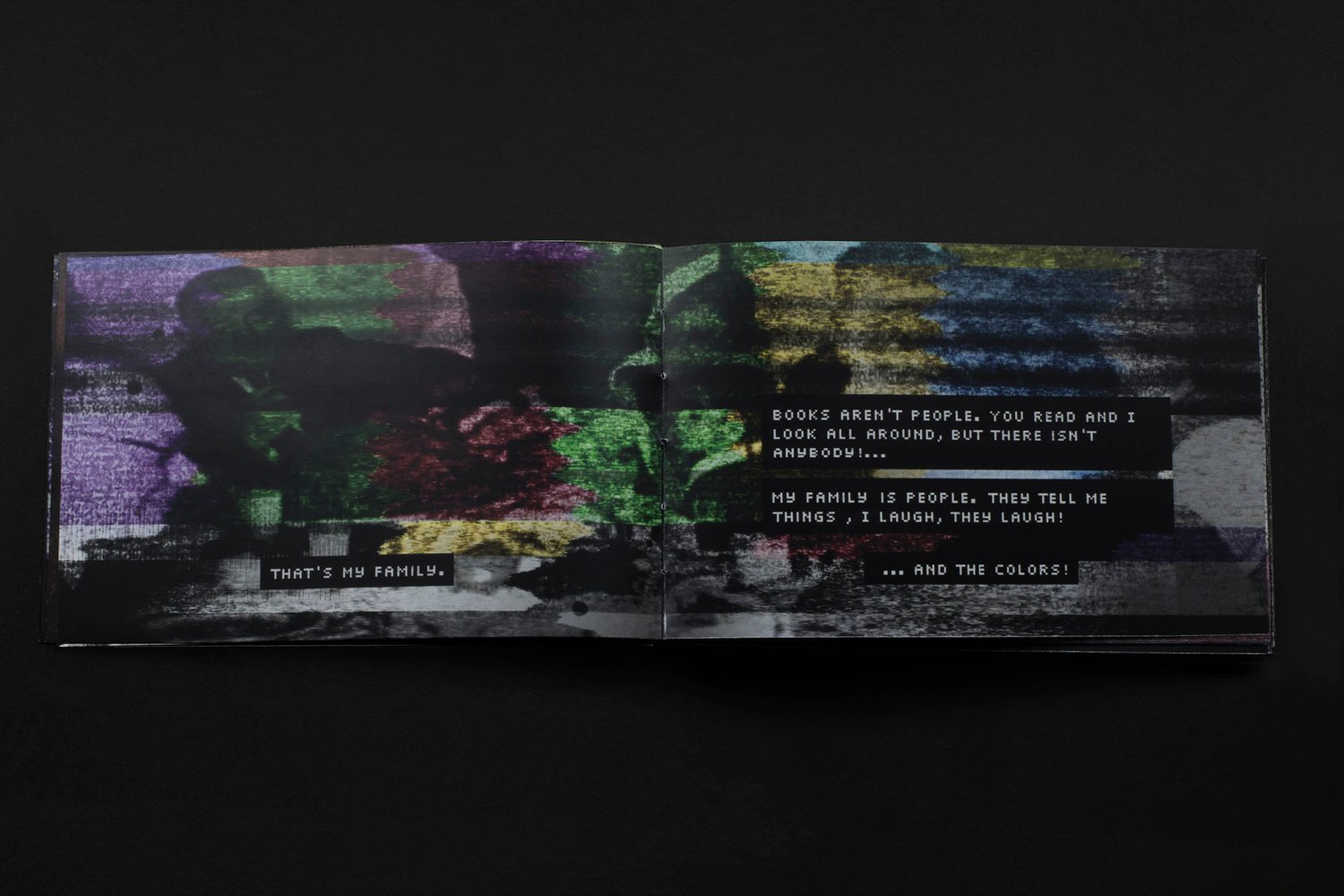 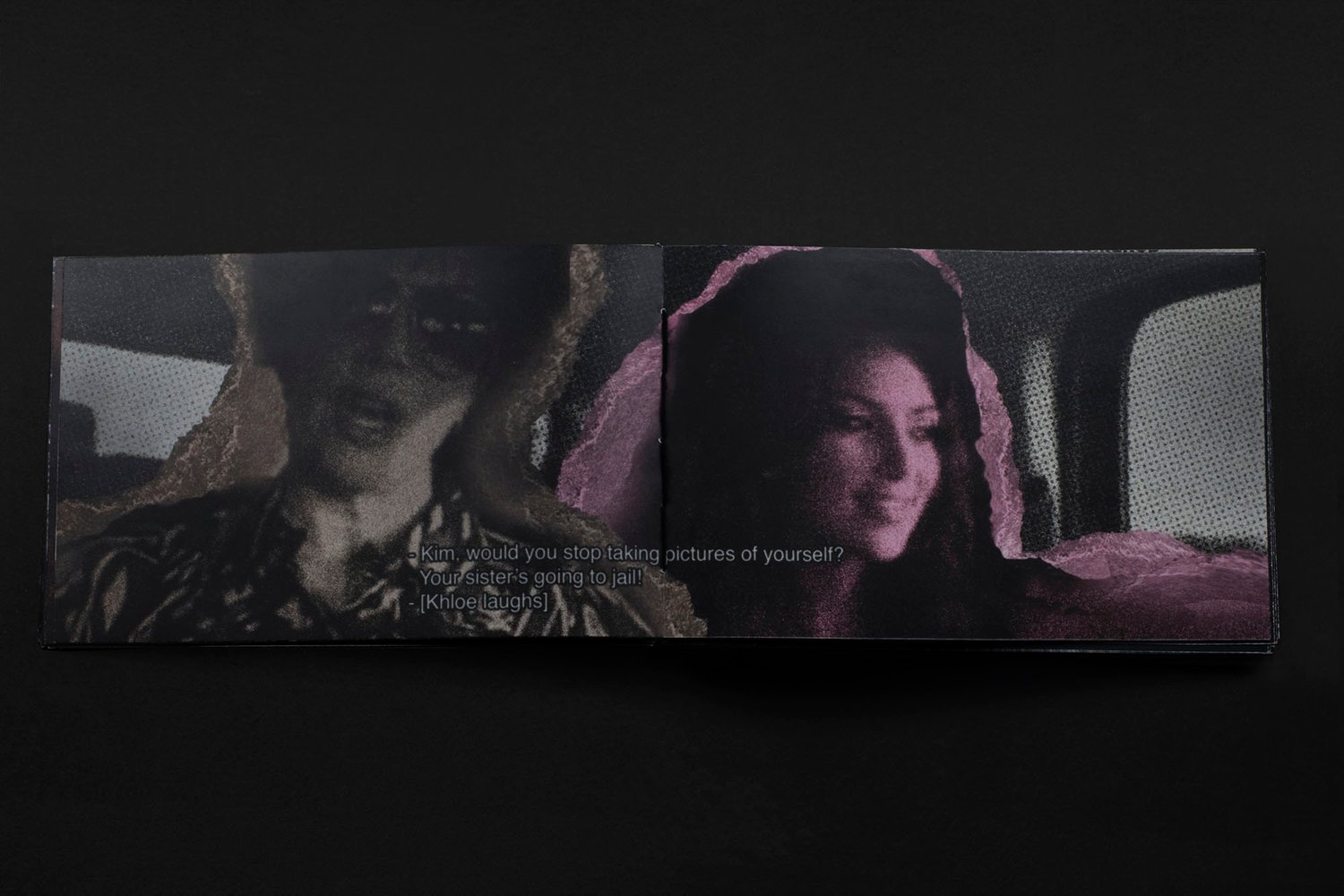 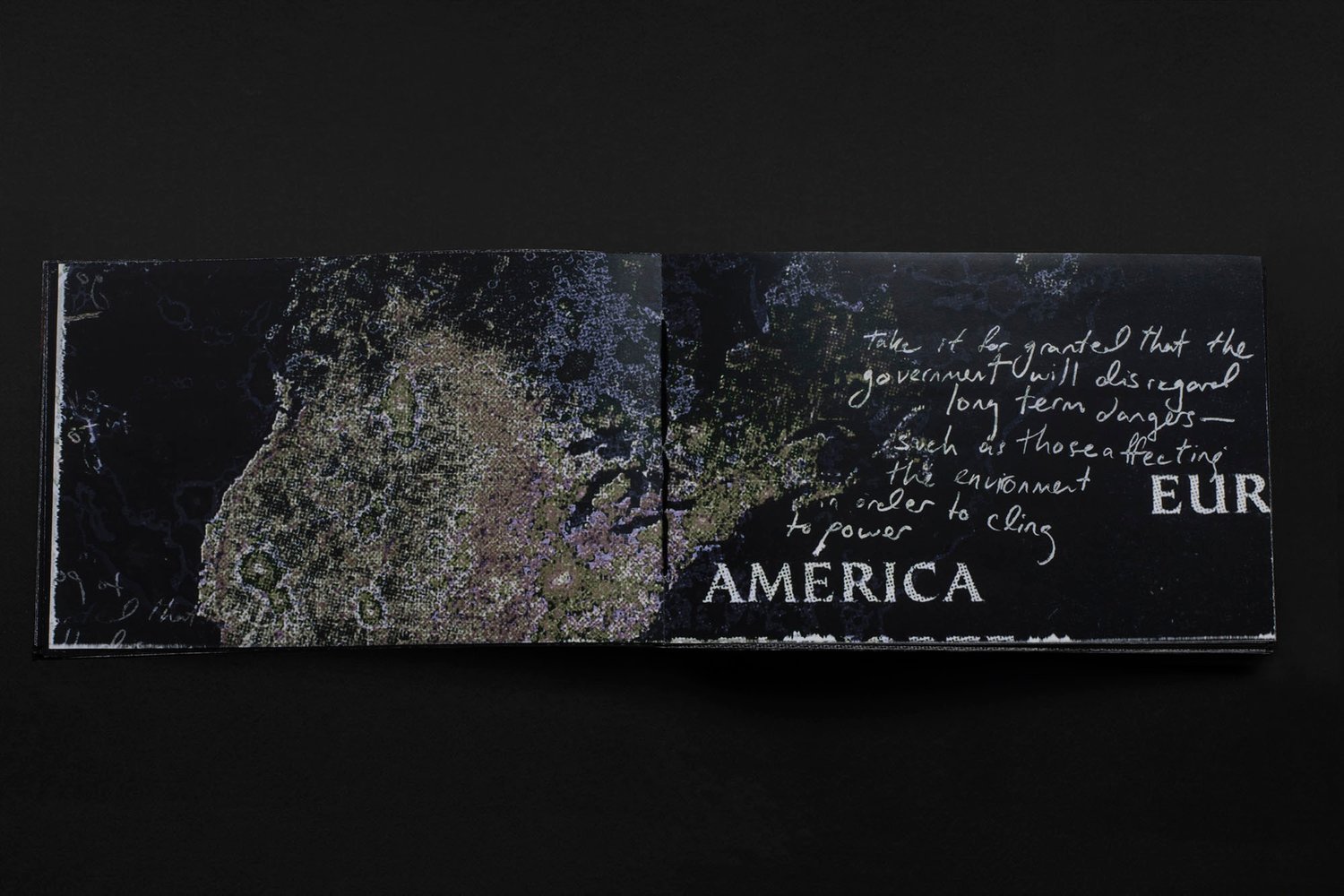 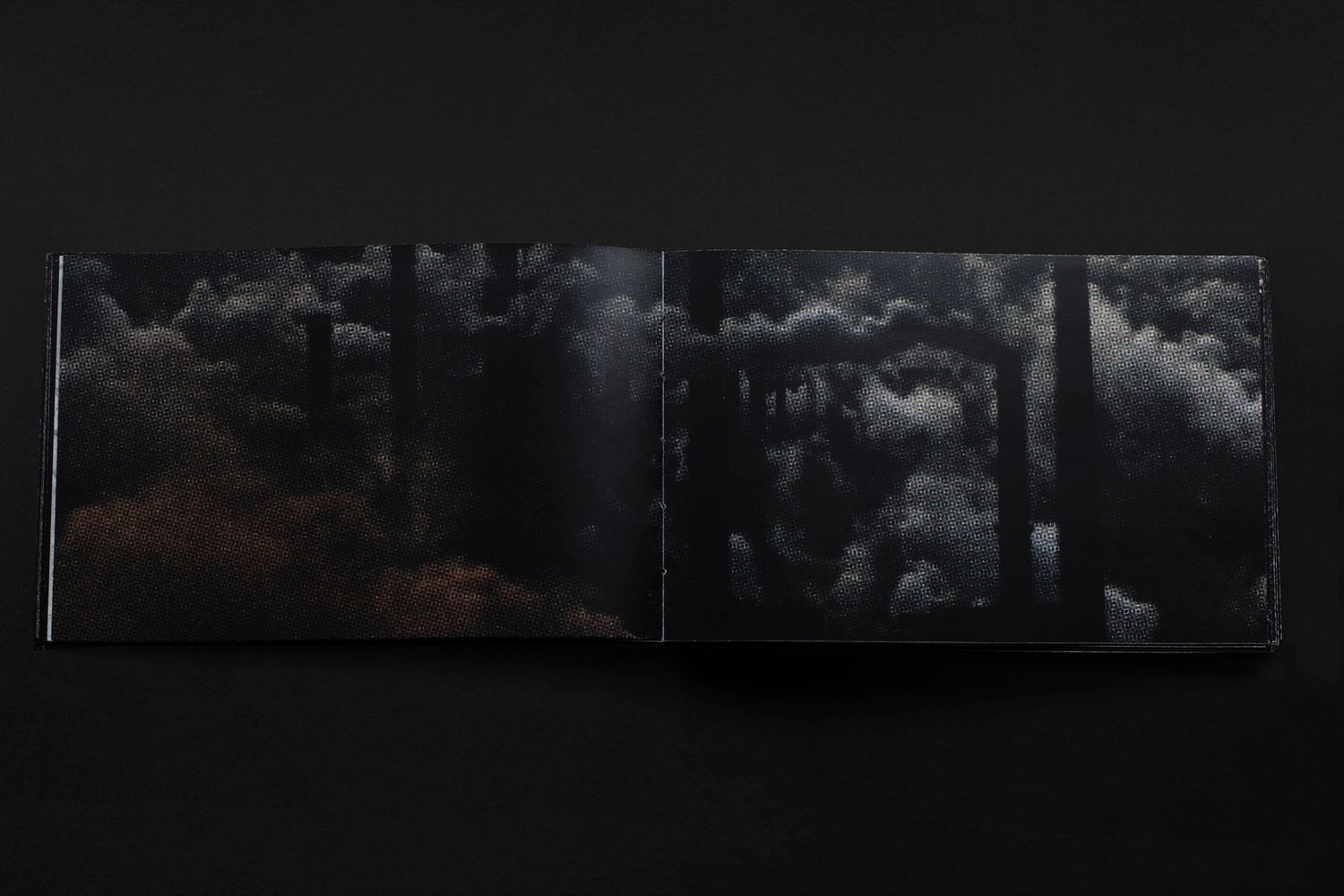 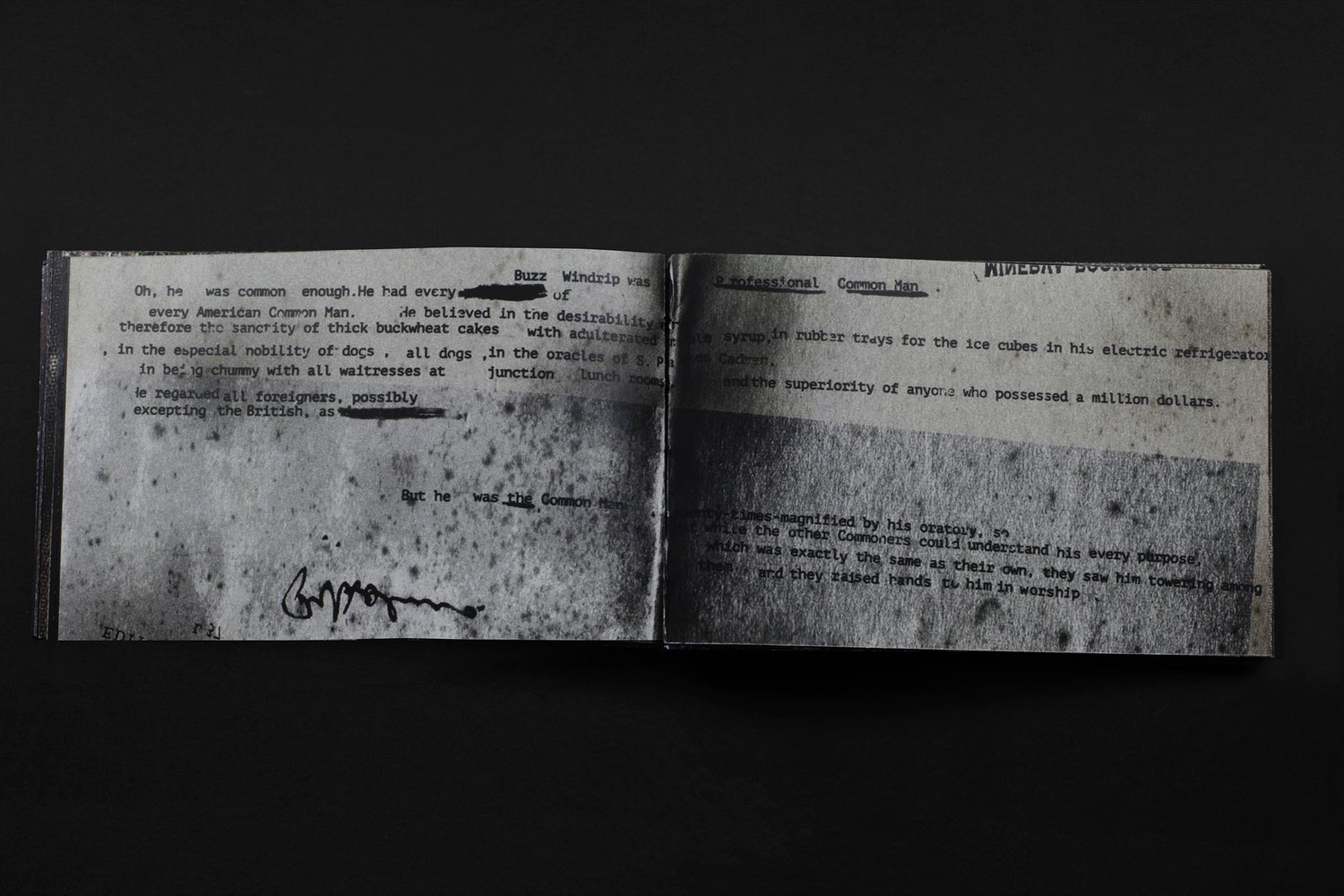 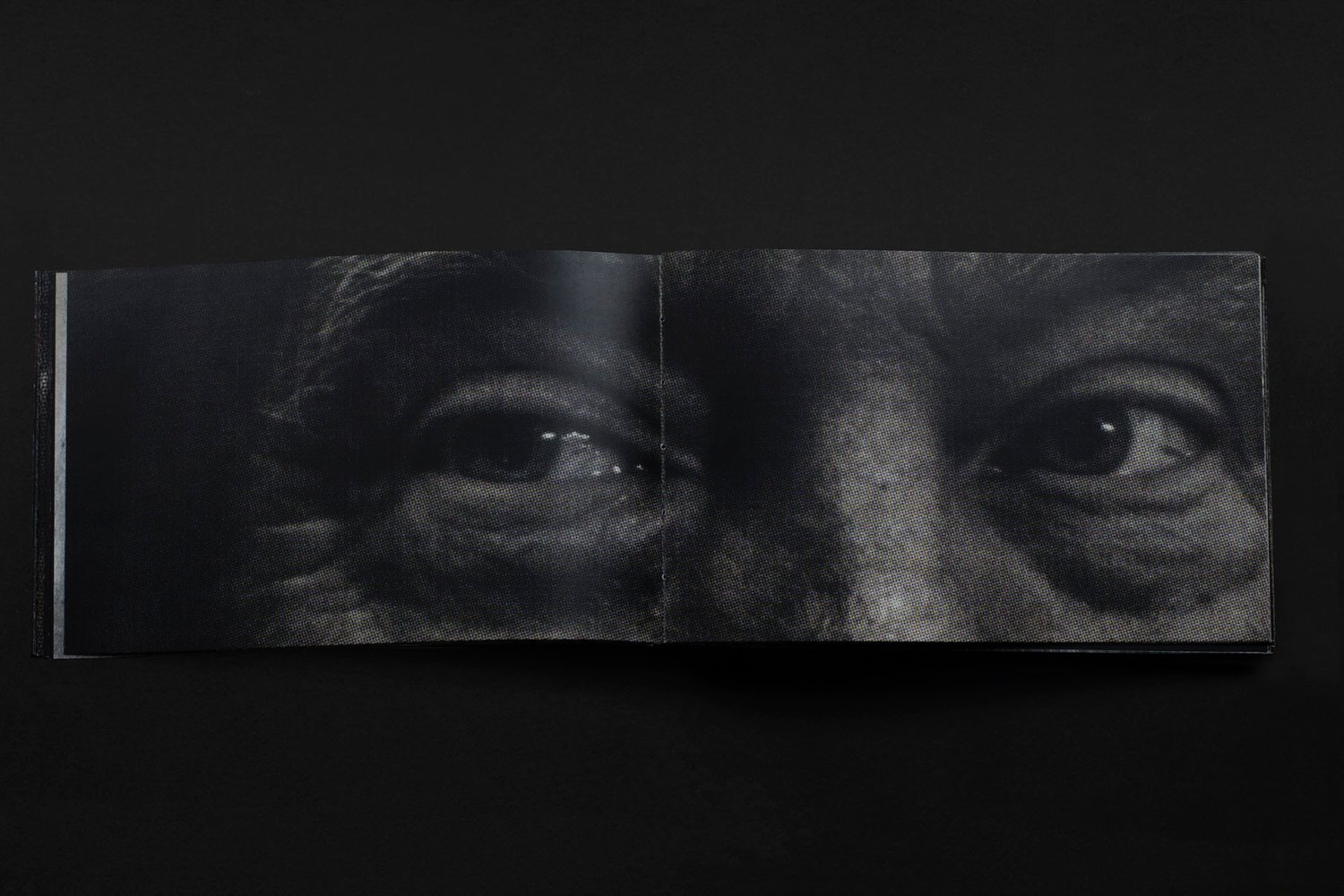 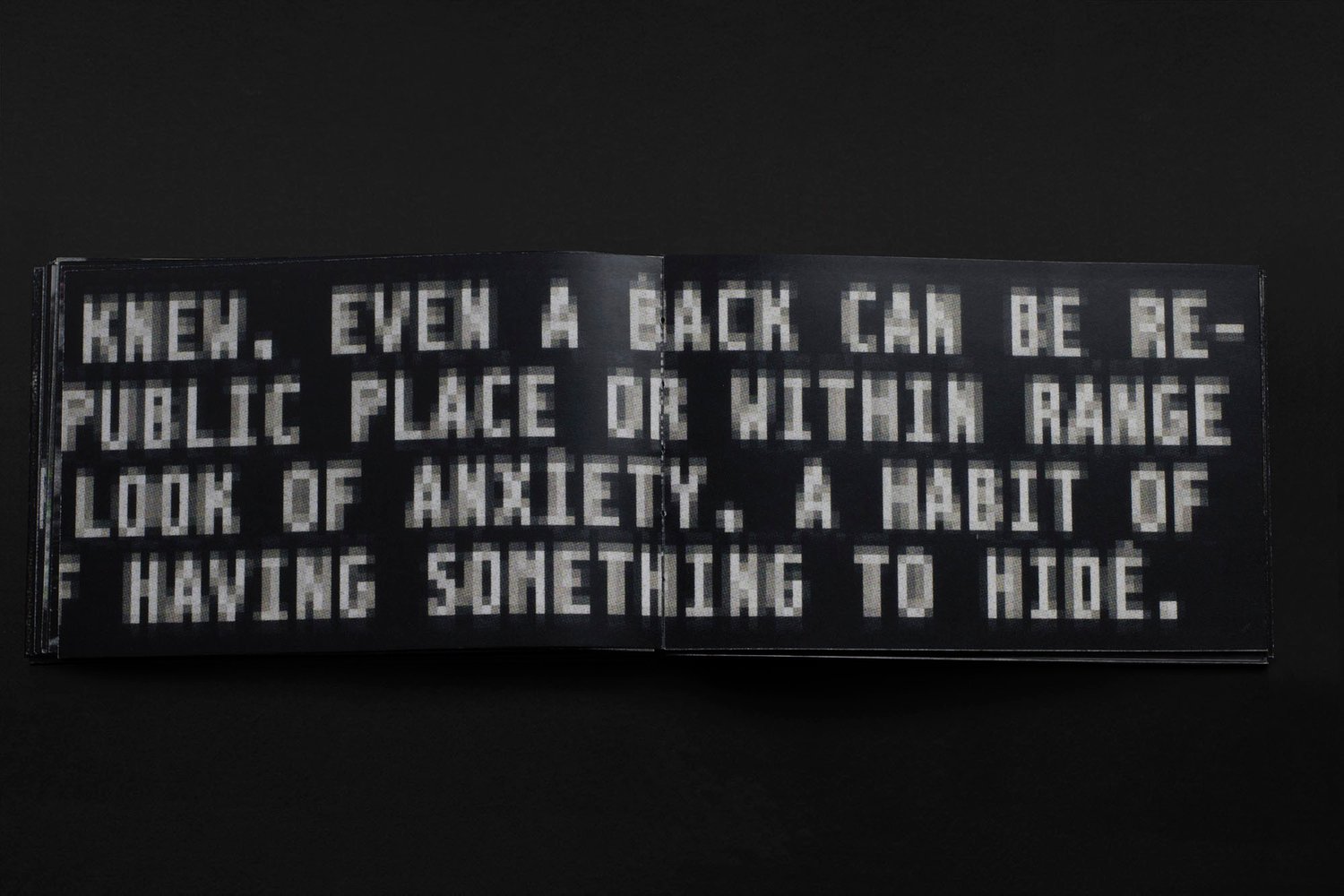 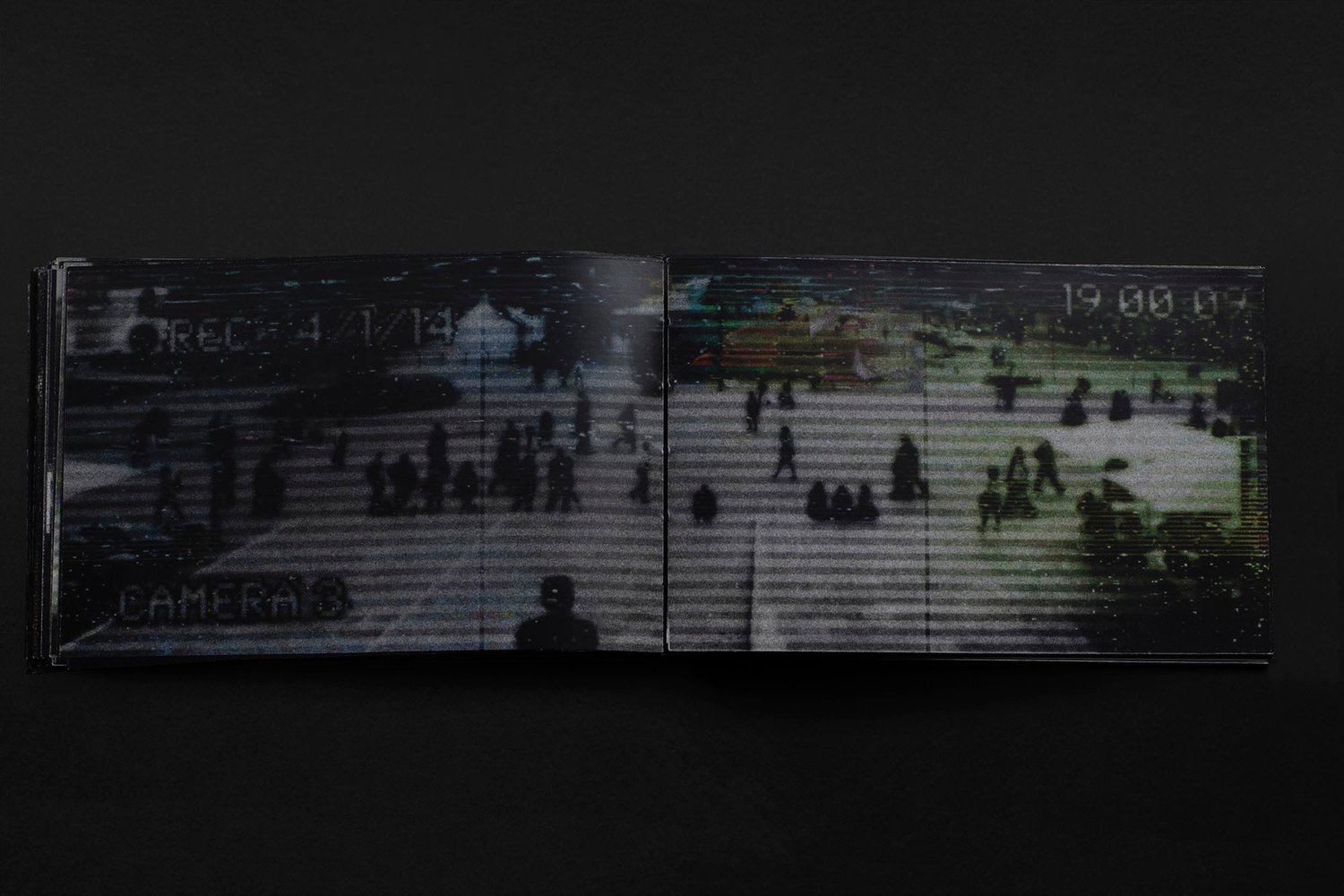 Together, we have chosen to accept dystopia and disregard the cautioning of these fictional tales. The goal of this project is to give enough visual and written evidence to readers to nudge them to think about the dystopian cautions we constantly choose to ignore and are always shocked about. This book was created to give readers a heads-up on how they can take preventative actions, for the sake of our current and future generations, to stop our world from becoming a full-on disastrous dystopian reality.