The portrayal of animals in our visual culture has traditionally masked or justified their objectification. As the environmental repercussions of habitat destruction, unethical farming and other violence become an inescapable reality, the time is now for a ‘graphic intervention’ in the visual representation of animals. Wild Things Are is a movement exposing the oppressive nature of art and design’s relationship to the nonhuman animal while inviting creatives of all disciplines to contribute to the expansion of this discourse. 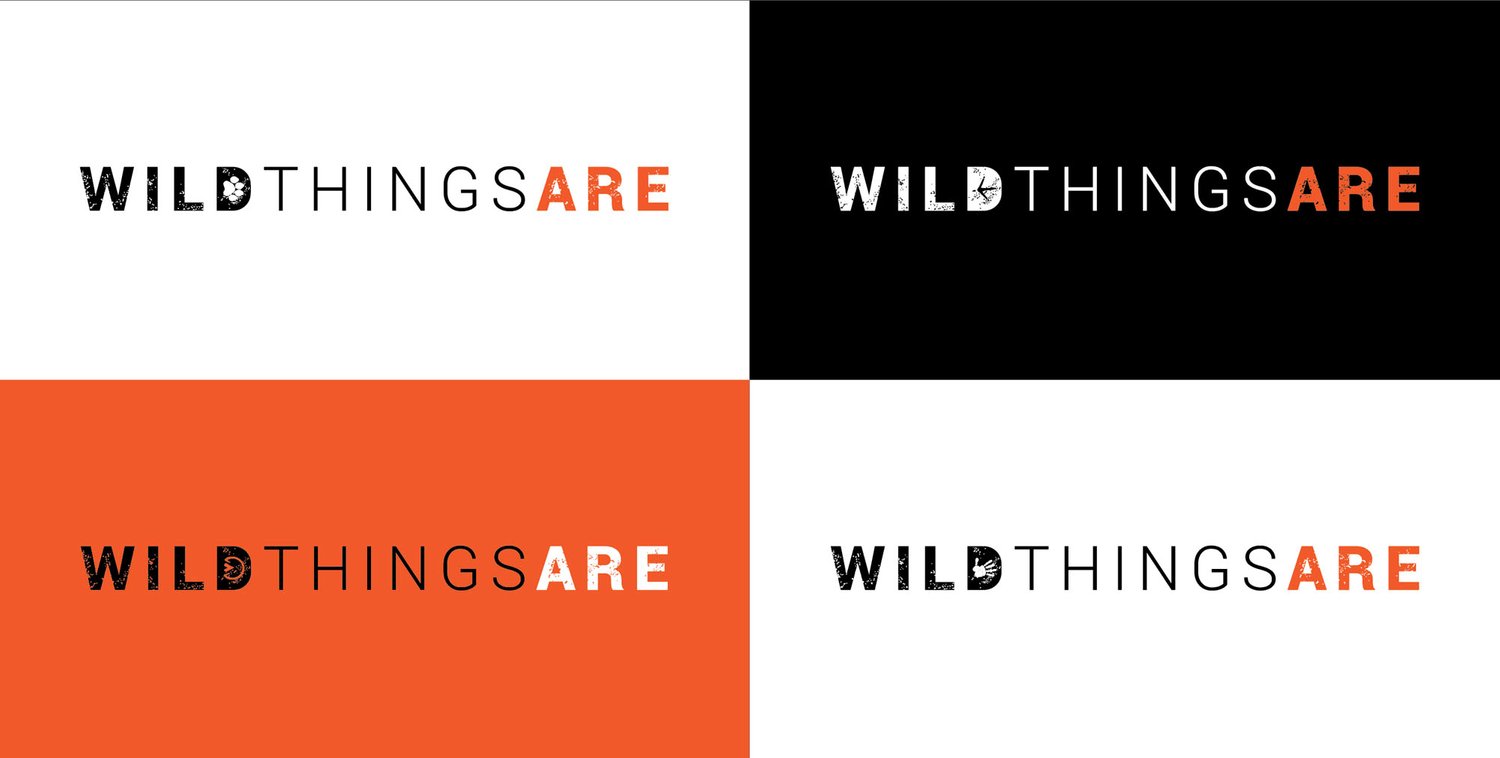 At the foundation for this project lies a genuine love for all animals and an unwavering drive to make this world a better place for the human and nonhuman animals alike. The path to Wild Things Are began with extensive research into the literature of the animal ethics discourse and animal representation in our visual culture. This revealed themes such as Anthropocentrism, our human-first and human-only moral framework, and speciesism, our systemic oppression or privileging of certain species versus others. Research also established key themes in challenging these behaviours, such as arguing for moral consideration based on the ability to suffer versus intelligence. In tandem with this literature review, a massive search into artifacts from Western art and design history attempted to reveal how these themes have been visually interpreted.

After exploring how the challenger-themes could be represented through an illustrative exploration, it was decided the project should be educational, targeting individuals working creative fields, bringing to light the deeper thinking behind this widely misunderstood discourse. The product would ultimately strive to inform creatives in how to ground work advocating for animals in established themes, strengthening and expanding this discourse.

The primary platform of this movement is its academic style website. The site is divided into three parts: The first addresses historical and present day perceptions of animality by defining themes of oppression and how to read them in visual art and design. The second part lays the building blocks for a new visual language in animal representation for dissenting creatives to consider in their practice. The third part directly attempts to bring creatives from any discipline into this discourse by allowing users to upload their own projects related to website content, to be approved for display in the Wild Things Are online gallery. 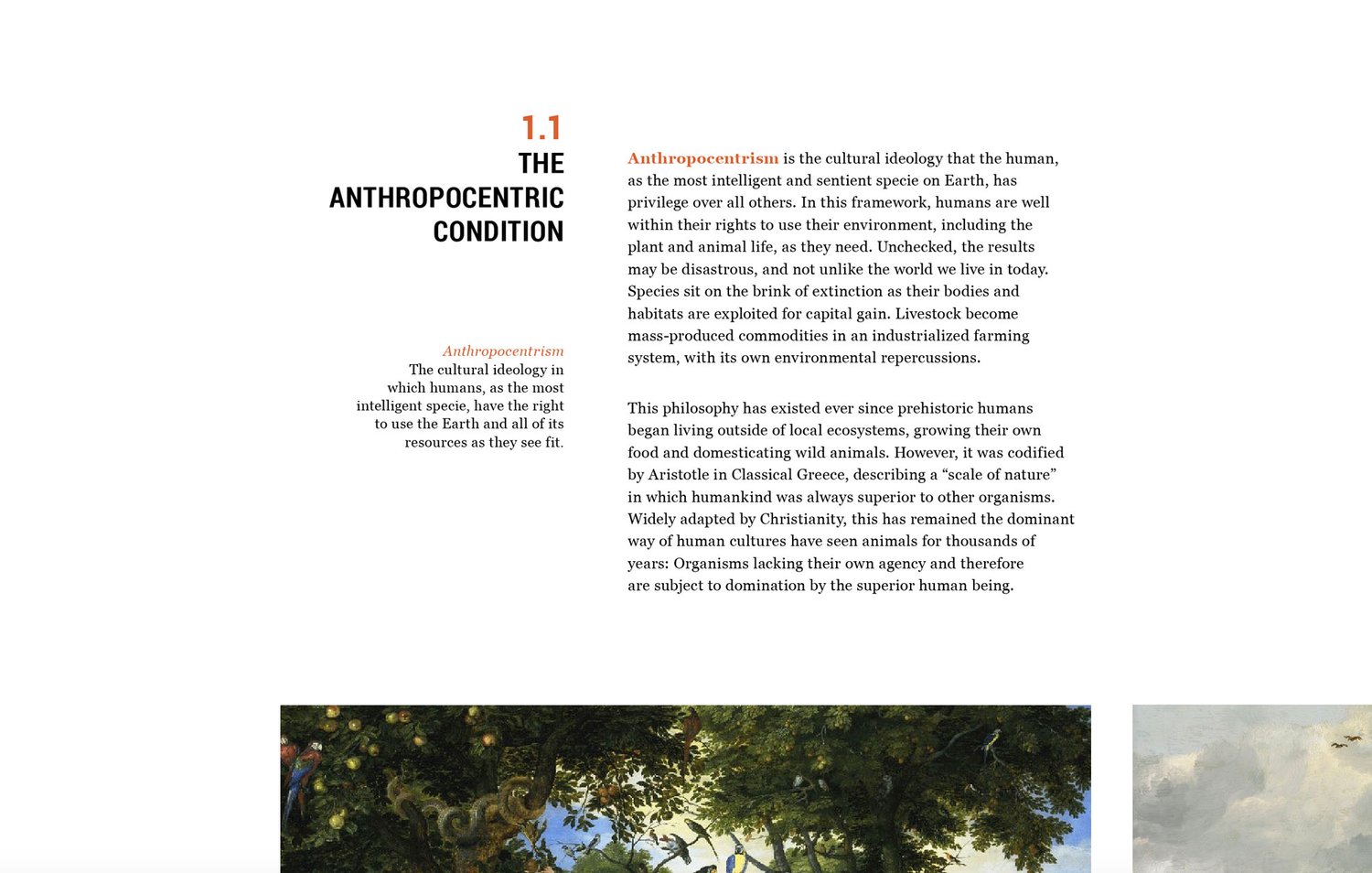 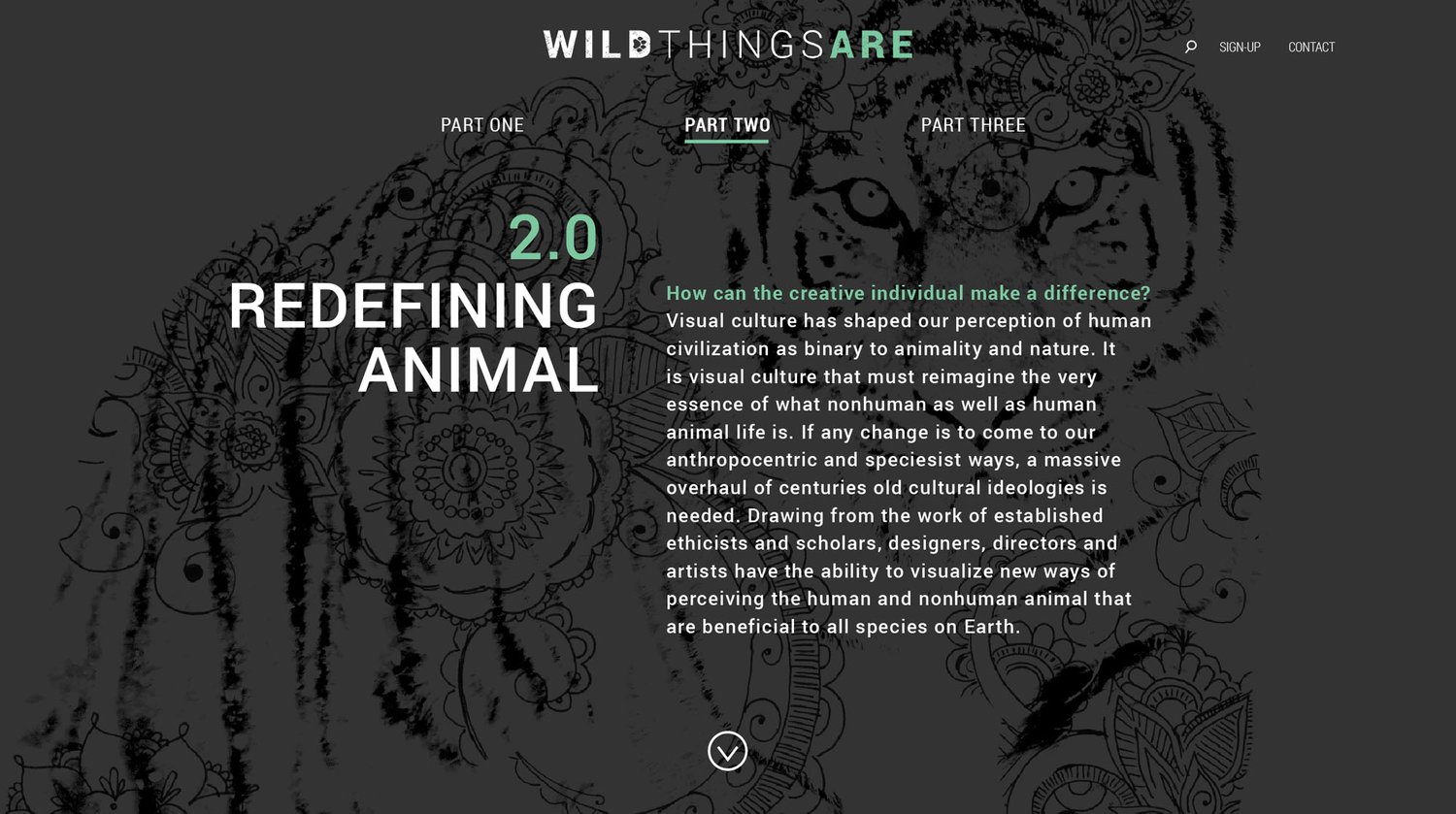 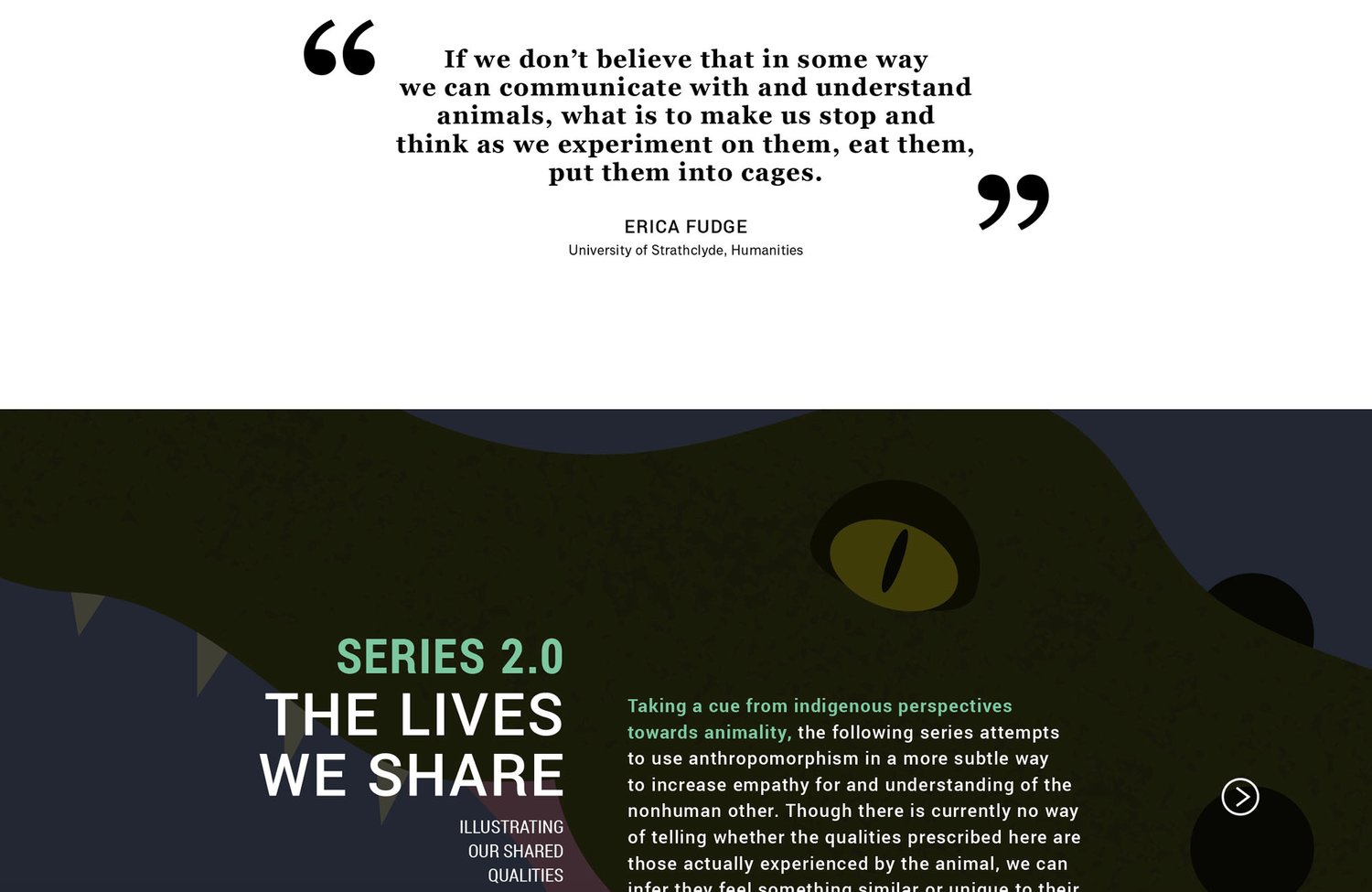 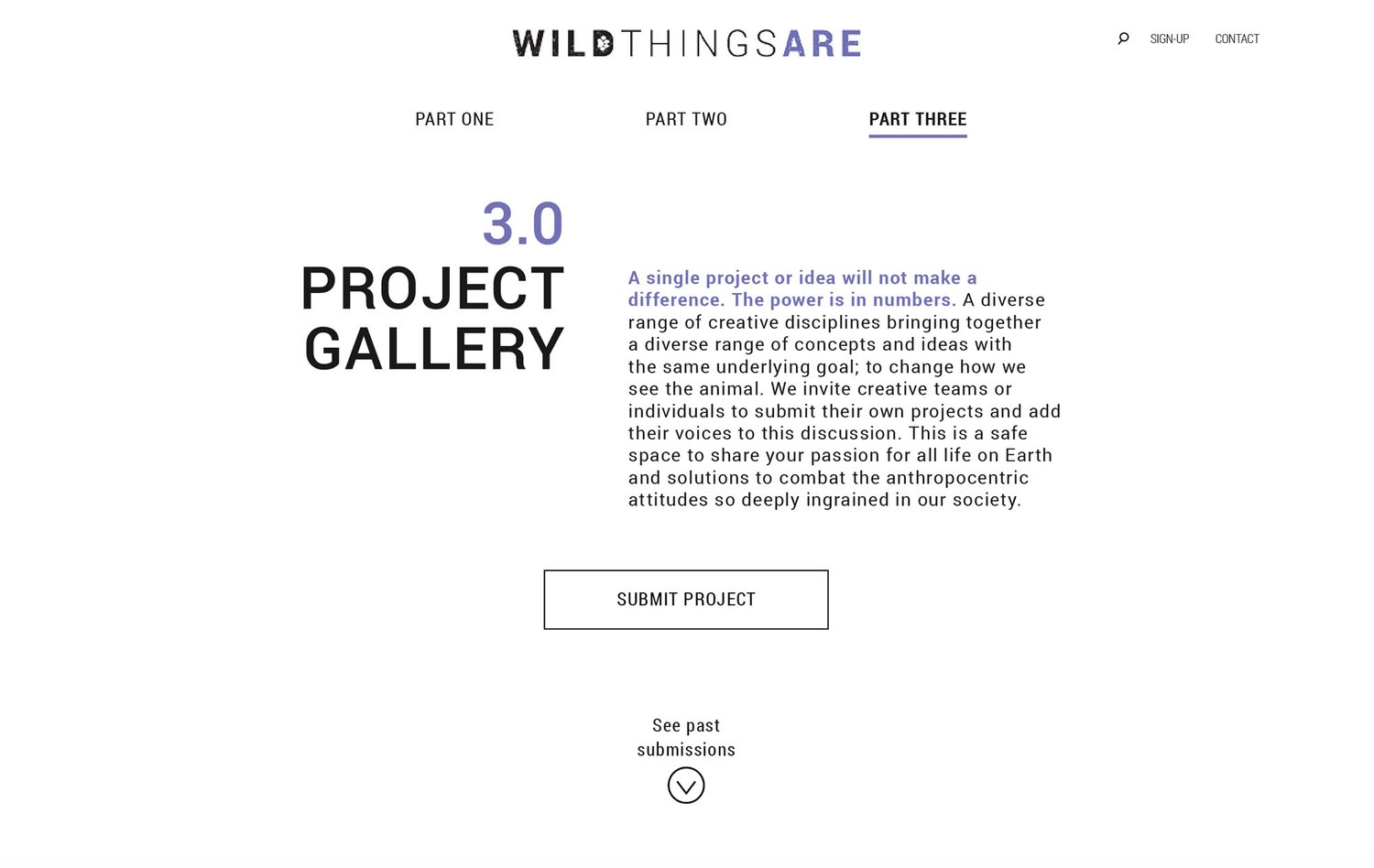