This project started with the idea of merging scientific phenomena into design artefacts in order to tell stories in a new way, working through this goal I created a generative type treatment that is inspired by the second law of thermodynamics and used it to express the current state of America.

As I mentioned earlier, this research project started off with this question of ‘how can scientific phenomena enter generative design artefacts to tell stories in a different way?” Through this project I wanted to contribute to the dialogue between design, scientific and philosophical practice through my explorative exercises. The research explored how complex concepts can enter everyday design practice, perhaps impacting the way today’s designers approach projects by developing ideas that are rooted in nature as a means of creating more captivating solutions.

The scientific phenomena that was researched in this project was Entropy. I wasn’t able to research this subject in great detail – entire courses are dedicated to understanding it – instead, I glanced at the scientific concept in order to take what I needed from it to inform the rules of machine-generated works.

There were essentially three steps that I took to create this piece. First, it was to research the subject of Entropy to the best of my ability and synthesize it. Then, to convert that synthesis into rules that can be read by a computer. And finally, to execute the rules to form a generative type treatment and use it in a design artefact.

A pivotal moment in the research phase of this project was I found the text Entropy and Art: An Essay on Disorder and Order by Rudolf Arnheim. It helped me understand entropy within the context of art, and gave me clues for how to proceed in making something that embodies entropy. One of the quotes that jump started the process was:

“the material world moves from orderly states to an ever-increasing disorder and that the final situation of the universe will be one of maximal disorder” (Entropy and Art, 7).

(Above) Created in illustrator by using a warp distort tool, exponentially changing the variables according to the frequency in which they appear. In the end creating a form that is not recognizable. This is mimicking Arnheim’s quote above.

After this, I knew what I wanted the final output to look like so it was up to me to try to learn a new programming language in order to do it. A turbulent road was ahead, and along the way I learned to not be afraid of asking others for help. Below was by first attempt at using Processing to affect the appearance of characters according to their frequencies.

This sketch was followed with experiments in how to deform type according to the entropic trend of the universe. These sketches were also performed in Processing. 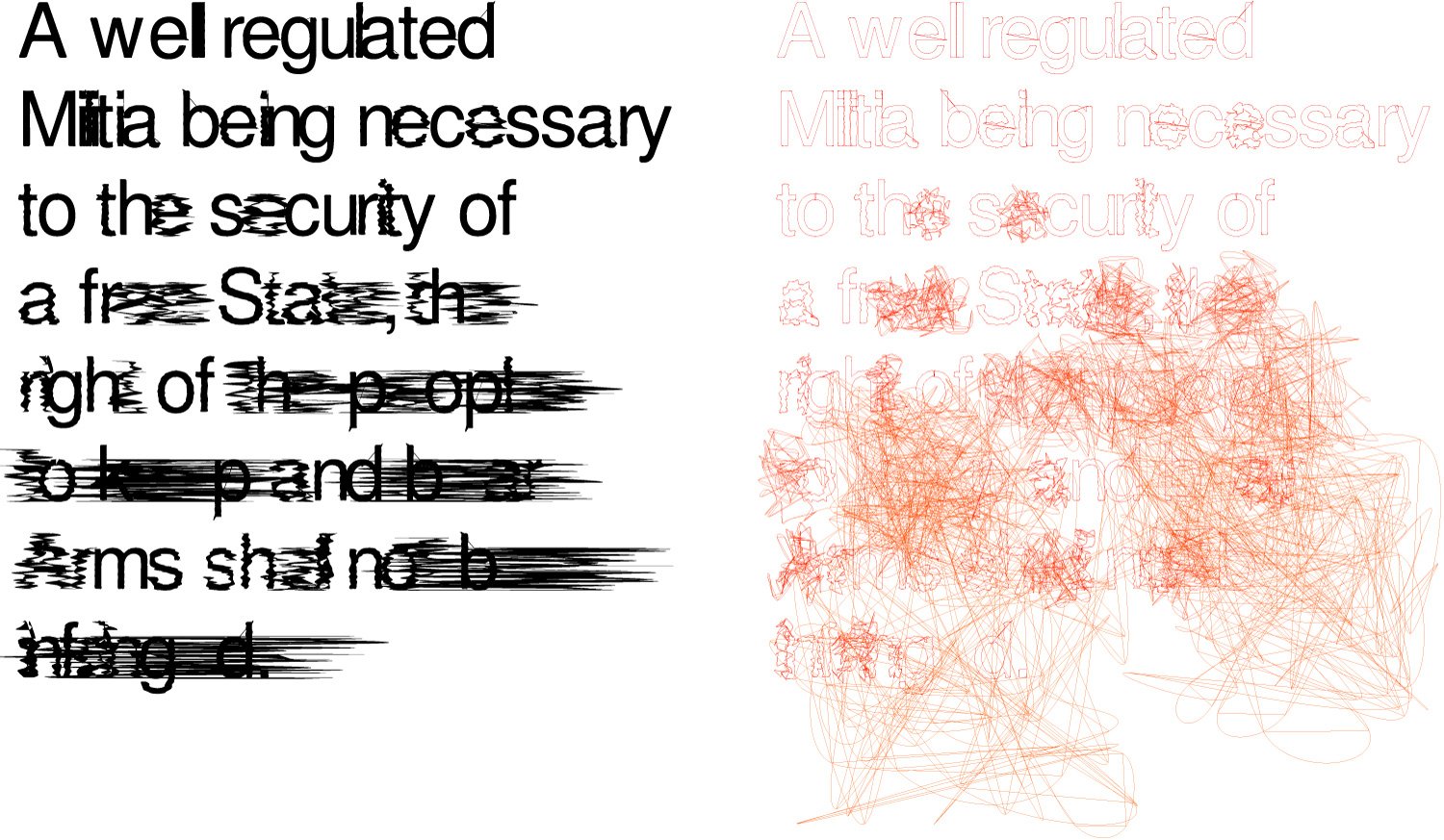 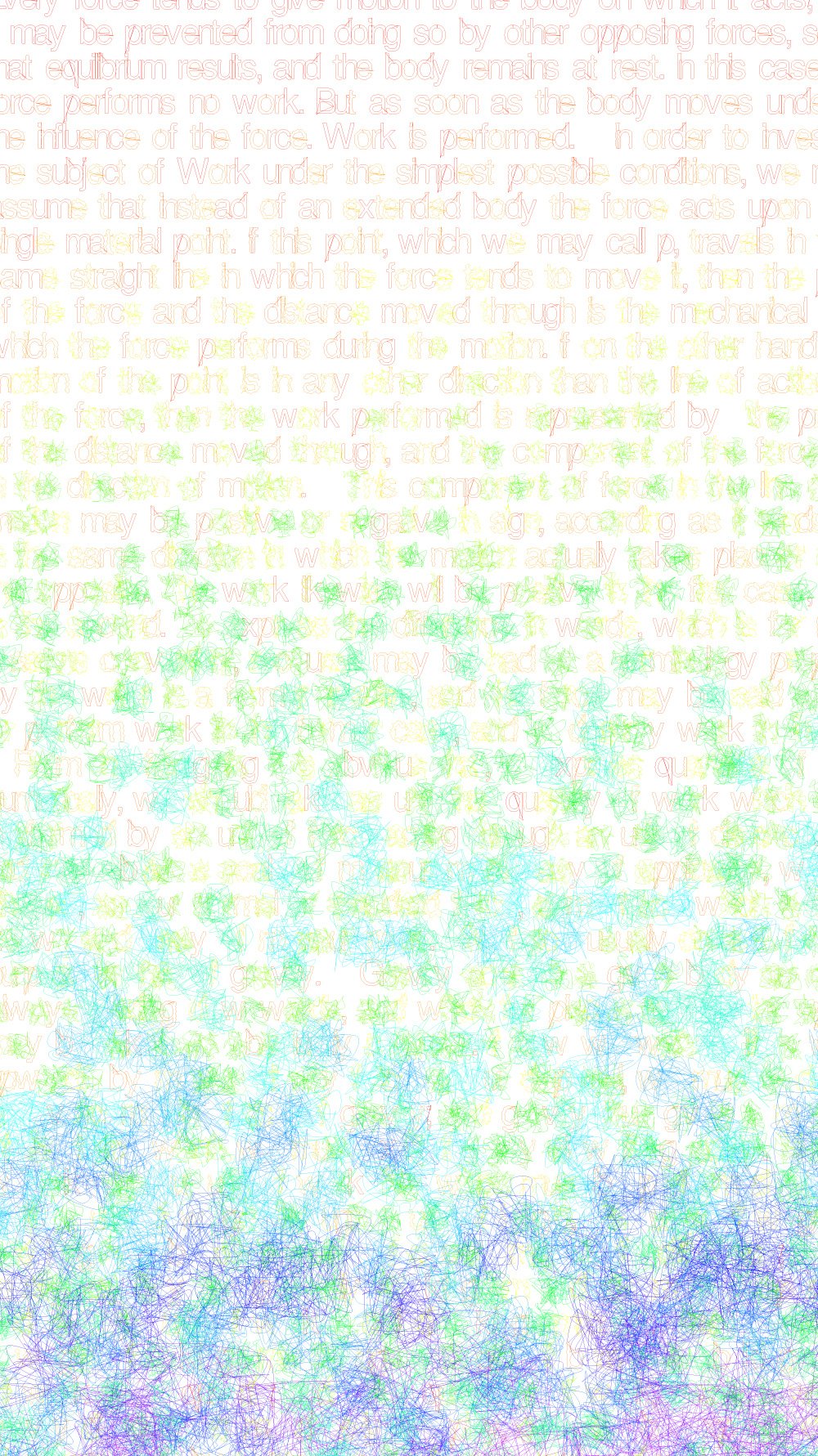 The images of the project in progress are a little misleading in showing how much trial and error lead to even the crudest of sketches. When coding, I lost track of the original goal set at the beginning of the project: to use natural phenomena to tell a story in a new way. My full focus was on the visual execution until now.

I have a typographic embodiment of entropy, now I need to use it to tell a story that’s appropriate. I started to think about fiction novels that were based on gradual destruction of one’s character to make a book that gradually destructed over time. But, why be limited to fiction when destruction is happening right before our eyes?

On the first of February 2017, President Donald Trump had issued an executive order that had been understood by many as the Muslim Ban or Travel Ban that he had promised as part of his agenda during his campaign.

Almost immediately, numerous protests and legal challenges began across the country, causing a greater divide in a country that has been torn apart already. Diplomats around the world condemned Trump’s actions, so did CEOs from the United States, and even members of the Republican party were against the executive order. The executive order immediately caused chaos across the country, and in my view if it hadn’t been challenged by the American judicial system it could’ve resulted in even more destruction in the future. 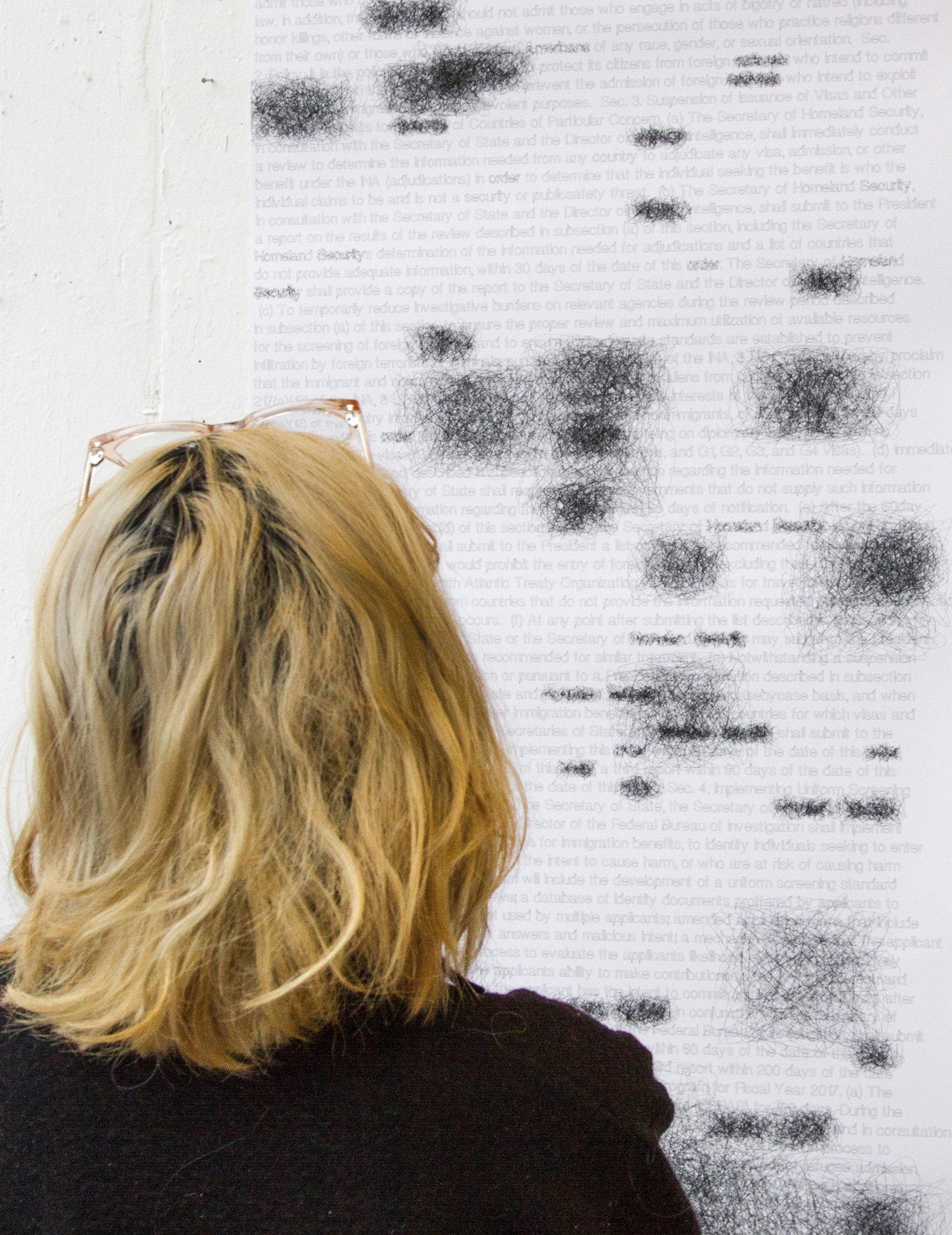 I use Trump’s Travel Ban as the text for this work as a representation of his destructive behaviour, steering America into an even more divided country that will eventually result in chaos and destruction. 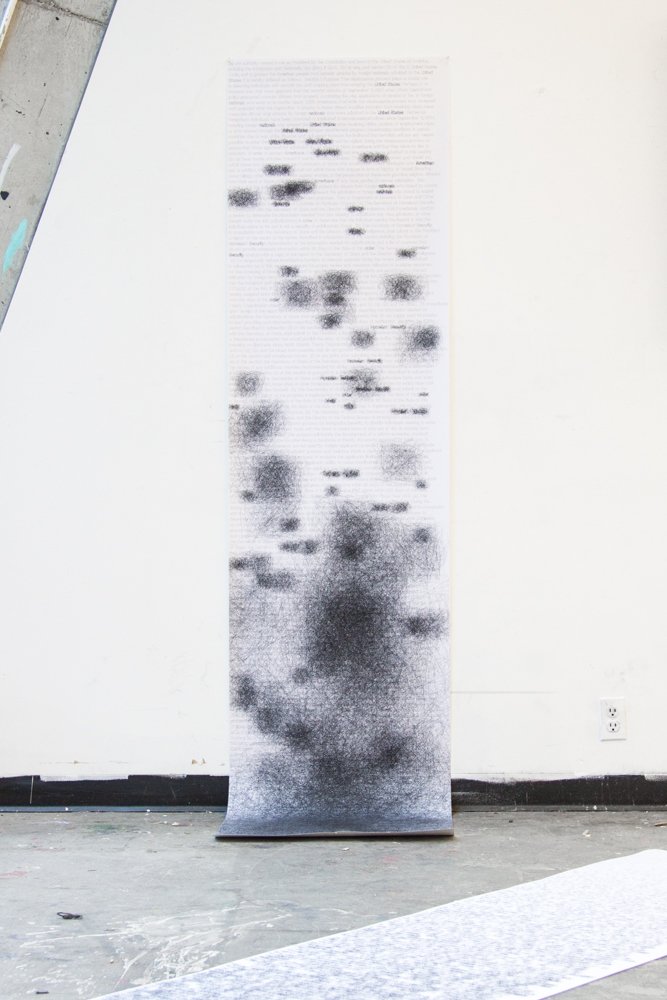 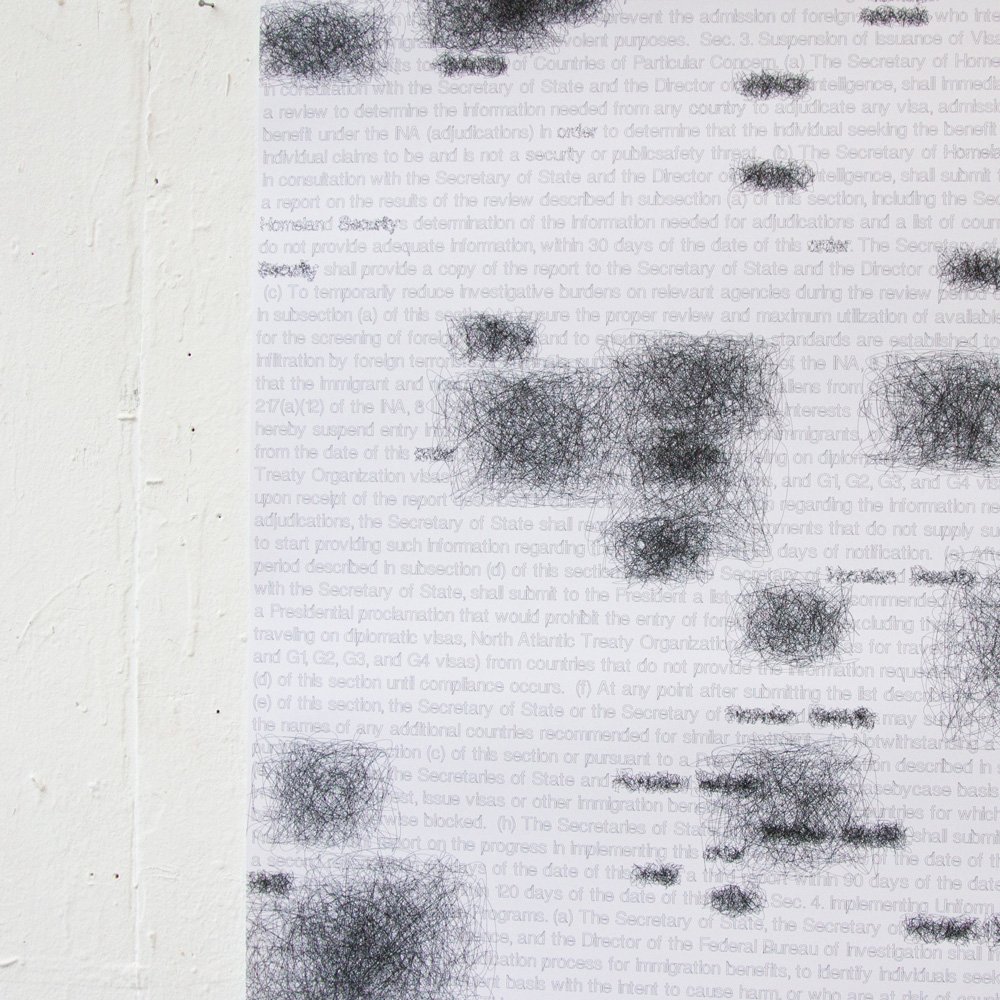 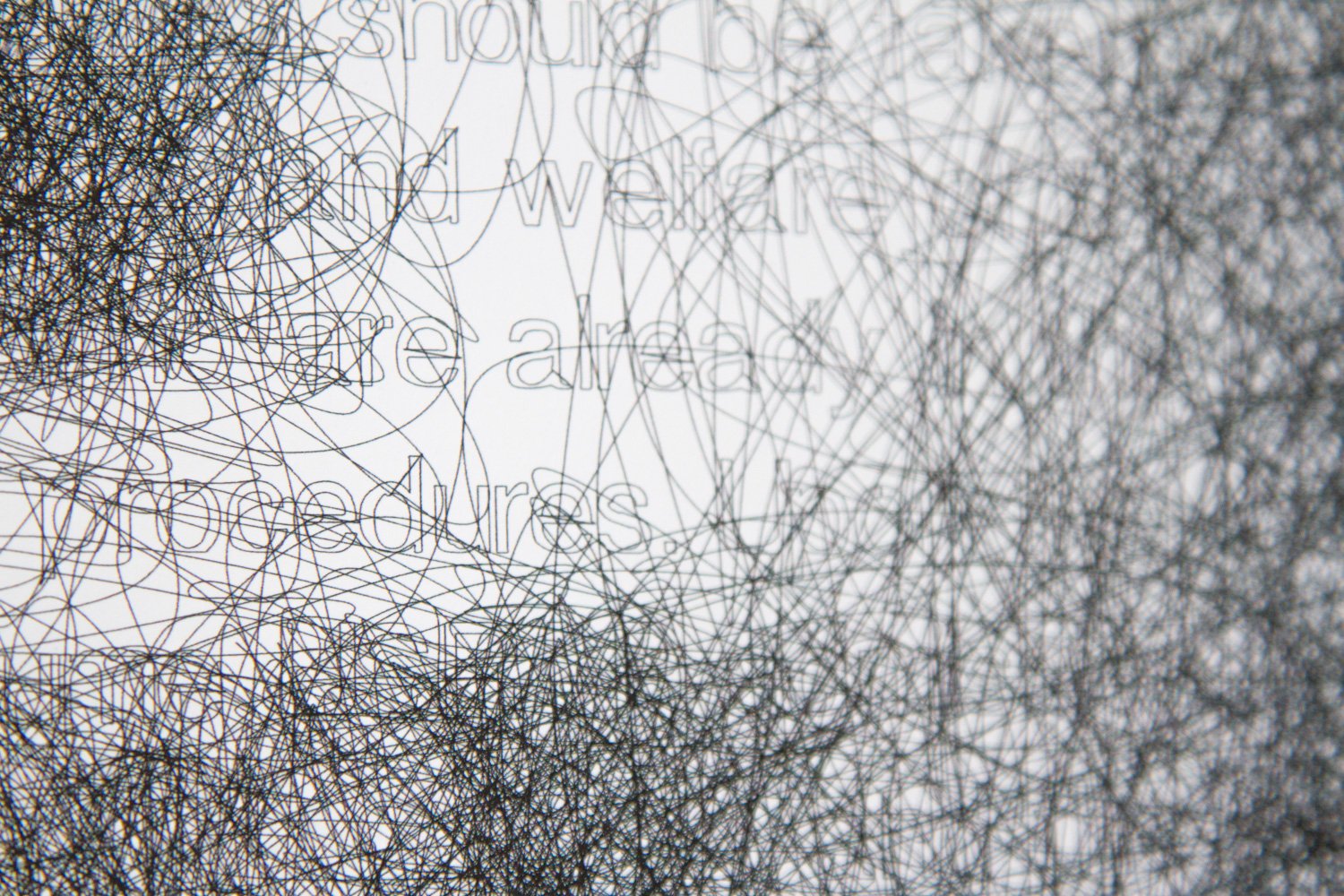 The final output of this project is a mammoth 24x100” poster using the generative typographic system based on entropy, mimicking Trump’s path of destruction through the exponential deformation of a set of words found within Trump’s own executive order.