FU*K! is a informational brochure that advocates becoming vegan in a non-traditional method. No green leaves and sunshine here, just straight facts that’ll leave even a skeptic questioning themselves.

In an attempt to bring awareness about a social problem, for my Information Design class in my third year (now known as Information Narratives and Sequences), I chose to explore the concept of veganism and how to best present the material in an informative and appealing way.

According to The Vegan Society, “veganism is a way of living which seeks to exclude, as far as is possible and practicable, all forms of exploitation of, and cruelty to, animals for food, clothing or any other purpose.” In order to embrace vegan-living, a plant-based diet is consumed which excludes the consumption of all animal foods including meats, dairy, eggs, and honey, as well as avoiding products such as leather, fur and anything tested or which may cause harm to animals.

It seems almost unquestionable to not hurt another living creature for one’s own preferences; but vegans are often considered unpractical, crazy and even stupid by non-vegans. I discovered that the reason for this is that though people may think the intentions of being a vegan is good, it makes no real difference to the world. This mindset is unfortunately a fault of a larger system that profits from consumers buying animal-based products and making it so easily available.

As I began to research existing vegan organizations and how it is promoted. A few themes I discovered were that the way information was displayed was “too nice” or too graphic. Common problems with it being too nice was it made being vegan appear as a luxury and for the privileged who could afford to buy the more expensive organic products. Problems with content being to graphic is that most people won’t want to look at it! Although to scare (sometimes traumatize) people into being informed about what actually happens to animals in a mass production industry has proved to be effective, it also scares them away from wanting to learn more or preventing the problem entirely. In order to address these problems, I decided to focus on my target audience to be youthful students and young adults and tried to present the information in a way they may be able to relate to.

All thanks to social media and the accessibility to communication, I found that my target audience loves to share images of their food. I also discovered that my target audience was aware of the social injustices and lack of infrastructure that our society here in the east was built upon. Therefore, I developed the title “Eat like you give a Fu*k!” to my project.

In the end, I created a visual narrative in the form of a brochure/poster and digital application. The visual style is more likely to be taken seriously than if it appeared to look “too nice,” and the information was presented in a language that they could better relate to. The project not only included stats and statistics about veganism but also cleared some misconceptions and myths, provided meal plans, address larger problems such as health and economical issues, while further addressing the fact that using/consuming animal products is unnecessary and why and how we’ll be fine without them by encouraging readers to try begin being vegan just one day a week.

For me personally, this project was very interesting and has help me made some major lifestyle choices. I am not a vegan, but have since not used products made from/tested on animals, and have significantly cut down on my meat intake. Save the animals! 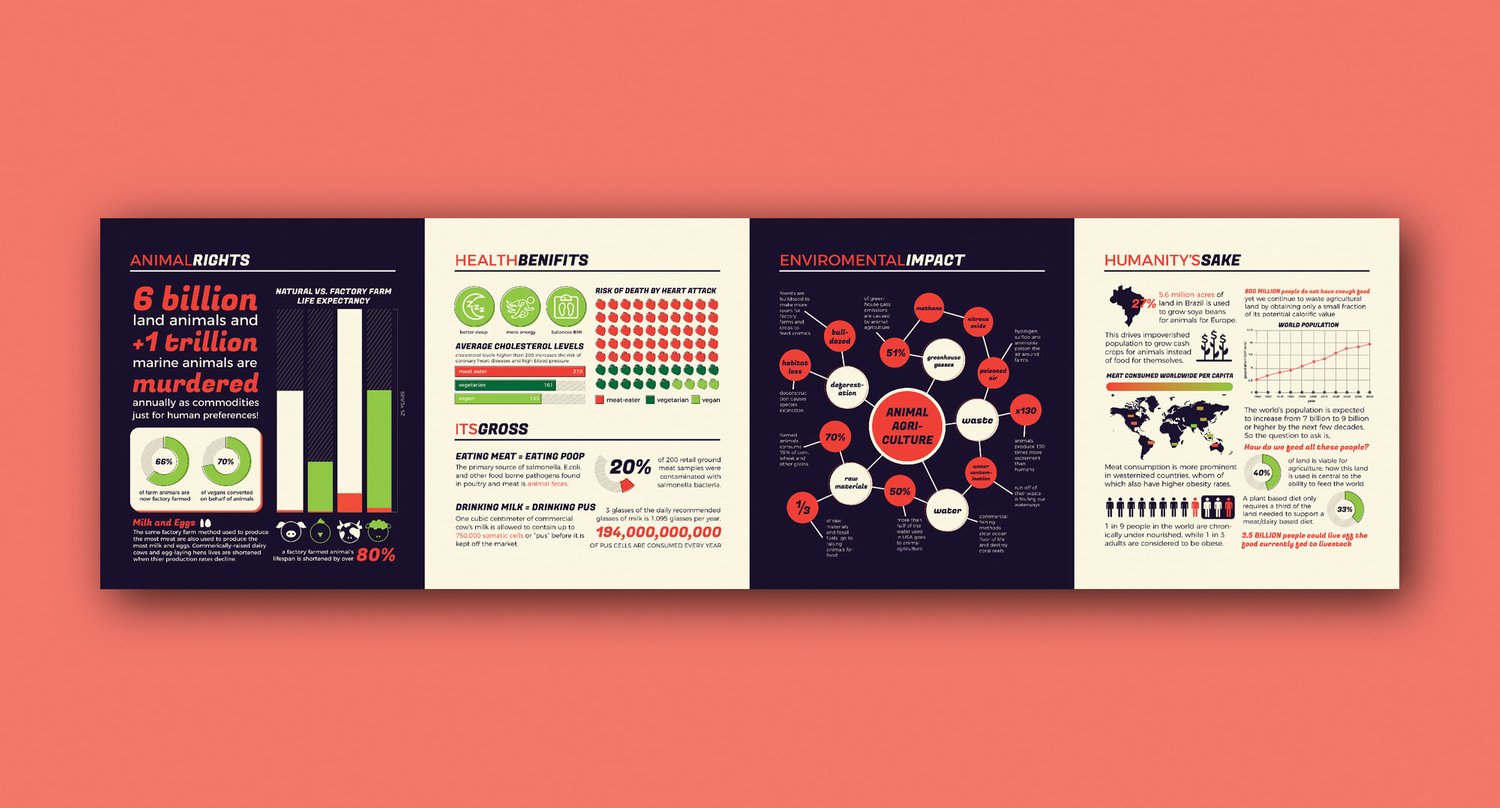